Two and a half

Just saying these numbers evokes ideas like cute, huggable, energetic, oh, and tantrums. Juliette is all of that and so much more. It's always amazing to me how six months can bring about so many changes in a baby/toddler. She's talking so much more than at age 2. And a world of difference compared to a year ago! She's discovering so many new concepts, like matching when we play Memory. Or the use of all these household objects like her daddy's foot file thingey. I found her pulling down her socks trying to use it like she's seen him do so often. Things we don't think she'll remember, she does. Like the name of the Piggly Wiggly supermarket in America when she saw my tote bag from there. She's still obsessed with Elmo and Dora. She's starting to discover the other "Sesalee Street" characters like "Gro(b)er" and Big Bird and Cookie Monster. Also Oui-oui, otherwise known as Noddy for you Brits. And the Wonder Pets are still on heavy rotation as well as Winnie the Pooh.

But I'll let her do the talking and she'll show you what she knows.

Yes, we're starting on the letters and numbers and colors. It's still rather rough around the edges but she'll sometimes surprise us by spotting a T on the news. Language-wise there's still quite a lot of English at home. She's learning her phrasal verbs (all you English teachers will know what I mean), those verb preposition combinations like put on, take off, get up, get down. She'll often get them confused like asking me to take on her boots when she means take off.

Catki is still her best playmate and I wonder if they're starting to resemble each other. He likes lounging in the sun and so does she! 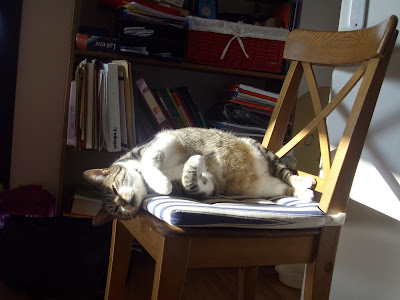 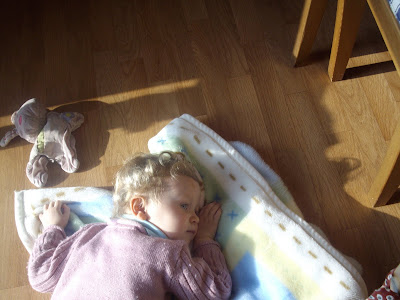 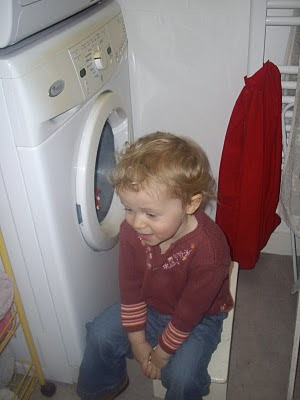 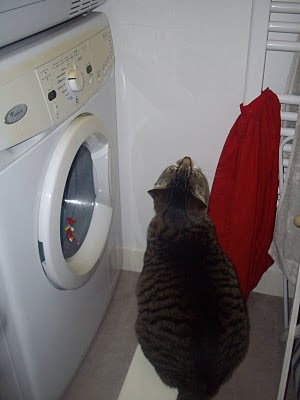 I'll find her imitating things I've said about Catki as well. Like "crazy Catki" when he's meowing for food. Or "Catki came to see you" when he wanders into her room. Remi has noticed that she'll make a real kissy sound when she gives him a kiss whereas for us she just tilts her head in our direction and makes us do the kiss. Thank heavens for Catki!

But I did mention tantrums at the beginning. She still visits the corner or has time-out in her bedroom quite often. For all her charms she's quite vocal when she doesn't like something. We're trying to work through the "throwing myself on the floor trick when I'm not happy." She's gotta get over that by adulthood. Sooner if I can help it.

Despite those not-so-pleasant moments, two and a half is really a delightful age and I'm enjoying being able to communicate more and more with her. She's a bundle of unpredictable fun.
Posted by Mil at 3:37 PM

yay for photos and a video!! She's so cute and talking so well! I love the pics of each of them sleeping in the sun...so precious.

It's so cool watching her grow up via your blog. It seems like only yesterday I held her in the hospital and told you "she looks just like a doll!"

Hugs to you both from down here.

she's really changed since the last time I saw a long video! so cute. She used to be a spitting image of remi but she now looks more like you. Soooo so cute and go for the phrasals! she'll be a pro in no time at all!

Such a change from age 1 to 2. She seems to be sailing through the "terrible twos" quite well. Thanks for sharing!

This blog entry only makes me miss her soooooooo much more! You're right--she's learned a tremendous amount in just a month' time. At this point parents realize their babies have broken out of the gate and are zooming forward. Try to keep up. Such lovely pics of both of your little ones.