Worry poisons my existence. I wish it didn't. And I've been wishing that for years. Sometimes I feel it eating away at my like a parasite in my stomach. No amount of fretting satisfies it. It keeps asking for more and more of my attention until I don't feel "right" if I haven't worried sufficiently about something. I read something interesting the other day. That sometimes spending twice as much time (or we could say worry) on something generally only adds 1% of value to the end result. That perfection is unattainable anyway so we should learn when something is "good enough". I'm gonna try and put that in to practice. But in the meantime, any remedies for kicking the worrying habit? Mine lately seems to be an obsessive need to read other people's blogs to see if any of them are experiencing the same life situations as me. It's more than my normal Internet addiction.

And when I'm nervous (or bored or breathing), I eat chocolate. Please tell me I'm not the only one. But the last two days as I took my Dove milk chocolate pieces (just two, thank you very much. Or three, or four.), I started to think the candymakers were mocking me. Because look what the inside wrapper said the last two times: 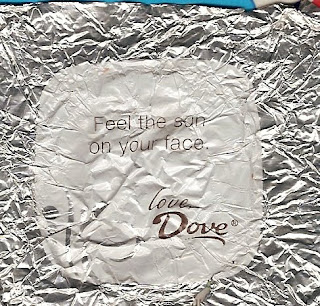 Didn't they know when they packed that bag that I would be experiencing two gray, foggy, blah days in a row? For the record we are now on day four sans sun. So definitely no basking in the glow for me. We had one gloriously sunny day last week and it was amazing how people just seemed to be in the best of moods. But these types of days are awfully rare in my region of France (the North-Pas de Calais). And I've got the stats to prove it. Lille, the main city in this region, is on the top (or bottom?) three of those cities with the lowest number of hours per year of sun. You can see southern cities like Marseille and Nice have at least a thousand more hours of sun per year compared to my region. This is why so many doctors prefer to set up practice in the south of France. And for the record, my own city in the US is right up there with 2600 or so hours per year (albeit with the humid, stifling heat sometimes). I'm starting to wonder how I've survived this long in my new nearly sunless climate!

I think only the sweet powers of chocolate can console me after learning all this. And if I don't get an appropriate message in the wrapper this time I might have to eat the whole bag.
Posted by Mil at 3:34 PM

I wish you luck, but I can totally relate. Chocolate is sometimes the best medicine there is.

I eat chocolate too when I'm feeling down and worried..you aren't the only one ;)

And I think the grey skies over here (Paris isn't known for its sun either...) only makes things worse. The stresses of life seem to be easier to manage if it's warm and sunny out...even getting out of bed.

I'm learning that stressing out and worrying about anything and everything doesnt change the end result...so I'm trying to "just take it as it comes" which is a lot easier said than done ;)

Wait, you live in the Nord PdC?? Me too.. why didn't I know this and why haven't we tried to meet before now? Anyway if you are interested in some "sunshine" in the form of wine and good conversation, hit me up! I'm having a hard time with the gray skies and rain too, but it was snowing in Metz today..I try to remind myself that life could always be colder/grayer/worse.
Hope something good comes your way to lift your spirits!

I find that the messages in the DOVE Dark chocolate pieces are better messages. That's been my experience with the DOVE. Sort of the like the magic 8 ball, but in chocolately goodness form.

Chocolate does help one to feel better, at least for a few minutes of sweet bliss.

I can definitely relate! I am a major worry-wart, and the worst thing about it is that it affects my health (I have back problems because of it, tummy issues, trouble sleeping, etc). I try not to stress myself out but it's near impossible. I need to learn to regulate it properly or channel it into something else, but I haven't found out how to do it yet! Ugh! The perils of the human mind! We often make things way more complicated for ourselves!

This is my first time on your blog- looking forward to catching up on all the posts and I just added you to my blogroll!!

When I'm stressed or worried I reach for potato chips, and I'll sit there and eat the whole (big) bag and then when I'm finished I'll feel guilty, and then I'll stress because I think I'm going to get fat, and then the cycle repeats...
I wish I could be one of those people who cleaned or exercised or something when I was stressed. Such a bummer.