What a girl needs 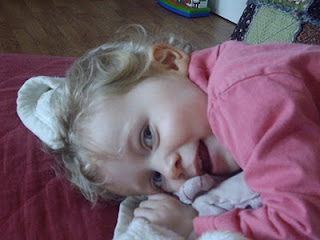 Not to be confused with the similarly titled Christina Aguilera song (which I must admit I like). This post is actually more serious than that. As a mom to a little girl, I often think about what I need to give my daughter. I don't know how I would be if I had a son. But I think since Juliette and I are the same gender, I instinctively think a bit more about what tools a girl should have to get on in this world.

I think number one on my list would be confidence. Unfortunately for Juju, her mom is sorely lacking in this characteristic. There are some days when I do walk with confidence and speak firmly with the knowledge that I'm right about this or that. But at nearly 37, I've still got some confidence-building of my own to work on. So how to instill it in a 2 and a half year old? It's in the little things, I think. Like when we do a puzzle together I encourage her to try and try again. And to not get bent out of shape if it doesn't work the first time. I celebrate her successes, like matching two cards in Memory or nearly drawing the letter "J". And I can see her face light up with pride at those moments.

Also high up there on the list would be valuing her abilities. This is similar to confidence, but it's also about showing her that she's worth something because she can do things and figure things out, not just because she's a "pretty little girl". Even from her earliest days I found myself keeping some kind of mental tally about saying "pretty girl" and "smart girl." Of course, every girl likes to hear that she's pretty (and, all prejudice aside, I think she is). But it's just as important for her to hear that she's smart and capable. That she can be a beauty queen if she wants, but that her brain is important, too.

I'm not a flaming feminist (not that there's anything wrong with that), but I also want her to know she doesn't have to fit a set idea of what a girl should be. Hence my ranting about the "girl toys" that are all about cleaning. She can be impressed with the big trucks on the road and then ooh and aah about a baby doll. She can do both. When we read the toy catalogs together I try not to get fixated just on the doll pages with her. That said, if she wants Barbies later on, that's no problem.

But where's the dad in all this? Yes, he counts too. He counts a lot. I also try to make sure Remi is complimenting her on all her accomplishments and that they spend some of that precious quality time together. He's not around so much in the spring, but I encourage him to make his time count with her. There's a fine line to this because I don't want to be a nag but a girl's self-esteem is intricately linked to her dad. So if he's there for the bedtime story and she's sitting still on papa's lap, I feel like it's a good day for them both.

Maybe it's not essential but I hope she'll find an activity she can enjoy outside of school, be it something physical or more on the creative side. There again, it's hard for a parent not to push nor let the child bully them into doing a million after-school activities just because their friends are. But swimming or piano or whatever it may be will hopefully help a girl (or boy for that matter) develop most of the things I mentioned above, confidence and pride, especially.

As I've said before, I'm no super mom and I certainly don't have all the answers. But I'm trying to give my girl the best, just like any parent.

So whether you're a mom or not, a girl or not, what do you think is essential for a child growing up today?
Posted by Mil at 1:24 PM

Email ThisBlogThis!Share to TwitterShare to FacebookShare to Pinterest
Labels: motherhood in France

I'm sure Juliette will grow up to be a beautiful, smart, confident girl and I really commend your efforts. I think it says a lot about you and your parenting that you are thinking so much about these things and wanting to raise your child to be self-assured and open-minded. She's a lucky little lady :)

I don't have kids, but if I did, I think I would insist on instilling in them respect for others and to be polite. I see so many kids of all ages who have no manners and are very rude and disrespectful and it makes me cringe. It might be old fashioned on my part, but I think kids need to be taught all to mind their p's and q's!

lovely post Mil. I would also try to break the (dare I say, French) cliché of what a girl should be and do. I would teach manners too and understandings of other people. gee, my English sucks, hope you get what I mean. xx

I think that by having a really healthy relationship with your husband you are teaching her the most important lessons which is to have a healthy relationship herself. I read this blog Hooking Up Smart which is about college kids and the hook up scene. A lot of girls post how they feel absolutely awful because they hook up with a guy and then he never calls...which is awful..but at the same time if the girl is confident and demands love and respect in relationships some of that heartache will be removed. If that makes sense?

Essential is knowing that your love for her is unconditional, but that her actions have consequences (tantrums, etc.)You give her roots and you give her wings.
What I wish we could give all young girls and young ladies is the realization that they should be pursuing their own goals and passions. They should NOT fall into that pit where they don't believe they are worth anything unless they have a man's approval or love. The respect, support, and love of a partner is a gift in this life--not everyone finds that--so it should not be the goal of a woman's existence. Ultimately, you MUST have something of your own that burns a bright fire on your own horizon. When you have that fire, you are passionate about it, and when you pursue it--whether success comes quickly or not---it is yours, and it makes you whole and satisfied, and confident, and in control (as much as this world lets you be in control). So, I would be alert to things Juliette is passionate about as she grows older, and encourage her to explore and be adventurous, whether it's baking or building. My two cents.