Thou Shalt Not Covet They Neighbor’s Volvo SUV

I watched the black SUV park in the middle of two parking spaces at the supermarket. I got a glimpse of the driver- a thirty-something woman with longish brown hair, and I instantly disliked her. For her disregard for the lines and mostly because she had a smooth ride and I didn’t. There I was in my Peugeot 106, a car most Americans have never even heard of. A two-door hatchback model at that. It’s the type of car I would have smiled condescendingly at 7 years ago. Or at least called a toy car. Here's a picture of a model quite like mine for those of you who've never seen one. 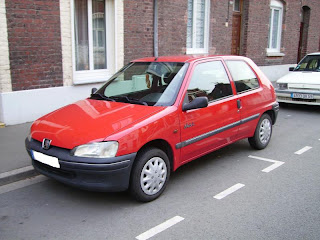 Two spaces away from the Volvo was an Audi SUV, also black. This woman was loading her groceries in the spacious trunk. I started imagining how much room Juliette would have in the back of such a car, kicking her legs about in her car seat. But it would be tough to parallel park one of those mammoths, and didn’t that environmental type on TV just say that smaller cars were the way to go to save the planet? But my logic went out the window thinking of those plush seats.

Little did I know that later in the week I’d be happy just to be able to drive my “toy car” and see out the windshield. That’s because some punk smashed in the right passenger side back window. While I was sitting cozily in my student’s office discussing brands and value for your money, said punk was probably thinking I had a GPS in the car. In fact, it was with me in my bag. That’ll teach me not to leave the plastic support thing on the windshield. And in the vandal’s code of conduct, he smashed a window that would still allow me to drive home. But he totally disregarded the fact that there was a baby car seat on that side and that glass pieces would be littering the seat and area around it. Shame on him.

Luckily my student covered the window with yellow plastic bags and packing tape, which prevented some of the bitter cold air from entering the car on the ride home. I had to drop by the apartment and vacuum up the car seat before picking baby up of course. Remi called the company that always advertizes on TV here about window repair (Carglass répare, Carglass remplace = Carglass repairs, Carglass replaces), and just as in their ads, they took care of things quickly and efficiently. Now I’ve got a replacement window and they vacuumed up the major glass bits from the seat and floor area. I still found a few tiny pieces so I’ve got to watch out. And clean off the adhesive tape remnants from the temporary patching my student did.

And I’ll try not to complain too much about driving around in a “baby car”.
Posted by Mil at 1:56 PM

Oh my gosh, so sorry babe! I hate that you had to deal with that. And yes, how very rude of your vandal to not pay attention to a car seat. Glad you got it fixed - but you be careful! Love ya!

That punk will be getting a big lump of coal in his stocking this year. I'm glad you and baby are okay. And that the car is taken care of. Hang in there!

oh no! i can't believe that happened? What is wrong with people?? I'm glad you were able to get it repaired quickly though.

I'm actually quite surprised that nothing ever happened to my car because I had to park it in the street every night. Besides a damaged side mirror, no one ever broke or scratched anything. But, on more than one occasion, the other people around where I lived would find their tires slashed thanks to bored, punk kids.

Sorry you had to deal with that. :(

Dear Milam,
WOW!!! That's an awful way to spend a day. I've been there. Once someone broke the driver's window of my car in the middle of the night and opened the back door and took some packages from the back seat. They left the back door open and my neighbors were crazy the next day thinking I had been abducted. It was over Christmas break and I was sleeping in and REALLY enjoying it when I heard people screaming my name and knocking loudly on my gate.
The justice was that the packages they took were books from the book club that I was sending back. I laughed thinking how upset they were when they opened it because they probably couldn't READ!!!!

Glad you and JuJu are ok. Love you much,
Sunny