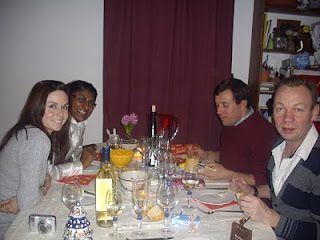 I think the most searched phrases on Google on Christmas night in France are “how to get red wine stains out of your tablecloth” (the answer is apparently salt but it didn’t work 100% for me) and “how to cure indigestion”. There was so much food, so much talk and catching up with my guests: Crystal (Canadian) and Caroline (Singaporean) and her French husband. It was a fun Christmas Eve dinner, but by the end of the evening the French husbands were still nursing the red wine bottles and the girls were resting on the couch watching pop videos and dreaming of their beds.


The next day was yet another Big French Meal with Remi’s parents. There the menu was slightly upgraded from my simple fare. There we ate escargots, a hot seafood mix cooked in brown ramekins, tender deer meat, potatoes, cooked apples, cherries, chestnuts and mushrooms. 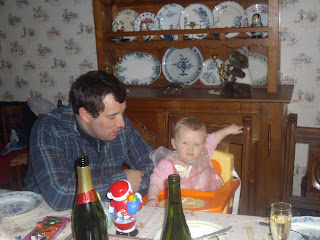 Followed (of course) by cheese and two desserts!
Then there are the presents from all those generous family members. Juliette doesn’t yet realize how very spoiled she was from both sides of the Atlantic Ocean. So many wonderful, colorful books, toys, clothes! And we were equally spoiled, too.

So now we’re in that transition phase. The mountain of dishes is finally done. The wrapping paper that tempted us has now been ripped off and is waiting to be thrown out. We have enough chocolate to survive a nuclear war. Remi said we might need to move again to accommodate all of Juliette’s toys. 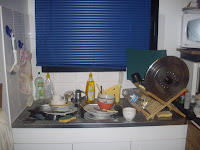 The sun is shining and only a few spots still have snow on the ground. I don’t think I have any lessons next week, so I’m gonna try to catch up on some projects like finally getting Juliette’s baby pictures in albums! She is, by the way, doing better after her bout of bronchitis. When I see her throwing tantrums again I know she’s doing ok.

Merry after Christmas Day to you all!
Posted by Mil at 4:13 PM

thanks for a great Xmas eve...I had a lot of fun and it was great catching up. Hope JuJu is feeling better...See you soon I hope!

(P.S. tell your mom thank you for the cornbread mix..I bought a new silcone muffin pan yesterday just so I can make them!)

It's not the stains in the tablecloth, or the dishes in the sink, or the quality of the food that you'll remember--it was the joy of being with friends. So glad you all could get together and laugh.
Crystal--you are most welcome for the simple cornbread mix. Anytime you want something like that, I'm happy to send some on your way too! Milam knows how to share.
:)