28 months and so much to do and say

Here Juliette shows us the latest Babycise moves. Faux snapping (that's me doing the snapping, folks) and spinning. Lots of spinning. Amazingly she's not dizzy after all that.


But she also likes quiet times like making a pie crust with mom. This one is so easy (er, easy as pie?!) and you don't even have to roll it out. Just take about 100g of butter or margarine (that's a bit less than half a cup), a cup of water (in France I use one of those mustard glasses for the cup), and melt it in a saucepan. Then add two cups of flour to your mixture (remove from heat). Mix well and pat it into a buttered pie pan. It's not necessary to cook it before adding your pie ingredients, but you can. 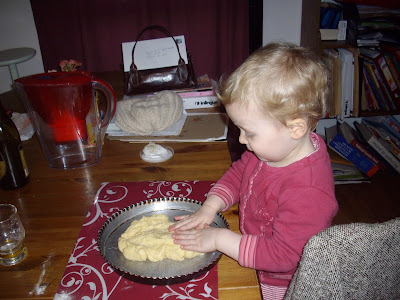 Language-wise she's still quite the little mimic. She likes to say "whatcha doin'?" and I realize I must really sound like an Italian New Yorker when I say it if her accent is anything to go by! And as she looks through the toy book, she'll say "we got that!" even for some toys we don't really have. And we're teaching her how to say Alabama, that place where we'll be going in a few short weeks. Except it comes out more like "Ala-gramma", maybe because she associates my grandma with it?

Potty trainig is quite the adventure, especially since after successfully doing it a few times, she's not into it anymore. If I ask her if she wants to sit on it she'll say, "non, pas ça" or "no, not that" in French. So to get a more polite response I'm teaching her to say "no, thank you."

But despite the tantrums (there are still some) and meals she doesn't always finish, most of the time she's a perfectly precious half-pint human.
Posted by Mil at 5:36 PM

aw how adorable! I got dizzy just watching her spin around!

She is so cute with her "we got that!"...it's too bad she was so shy with me at the beginning then got all social just as we were leaving!

And that pie crust sounds super easy to make...I'm gonna give it a try :)

So glad you guys got to see Crystal! JuJu does seem to be full of energy. She's going to wear us out when she's in good ol' Alabama.

She is so adorable when she's snapping and turning. I haven't heard Hot Buttered Popcorn in such a long time. Europop has a distinct sound, doesn't it.

Just from the two snaps/film of Juliette, you can tell the girl never stops moving and grooving and exploring. Hard to believe that now she's helping with the cooking! Patty-cake, patty cake, bake it in a pan...
Can't wait to dance and color and cook with my petit fille---if I can keep up with her! Whew!