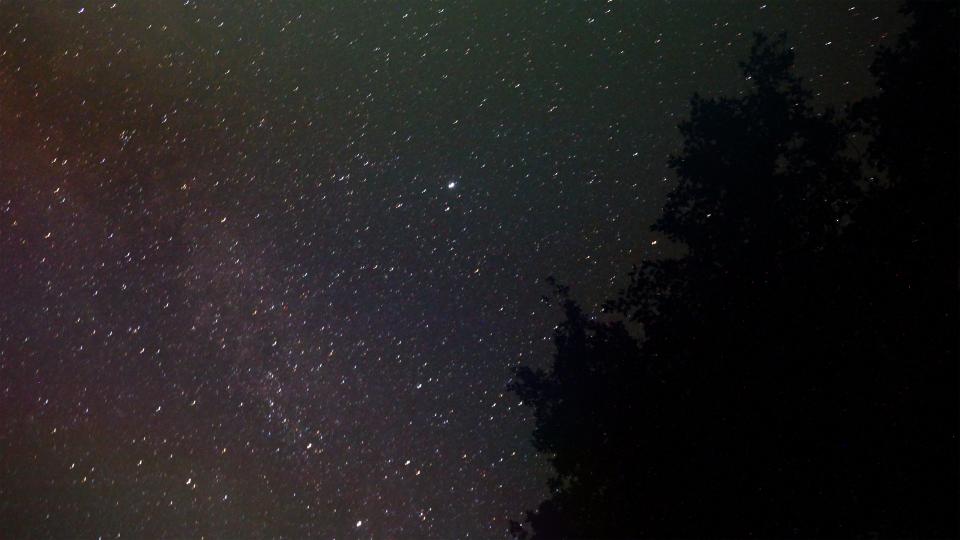 I wish I could say I took this picture.  I didn't, but I did see a sky full of stars very much like this last weekend at 3:30 am.  Juliette had come to my tent to ask to go the bathroom, and considering it was nearly freezing, I had no inclination to get out my crappy knock-off Android cell phone and snap a pic.  We did spend a few frigid moments star-gazing.  It's true you can see so much more outside of the bright city lights.  That was just one of the things I learned last weekend on my first ever camping trip as an accompanying adult with the scouts.


I love nature but I have to say I was not very keen on camping and helping (with four other parents) watch a group of 14 scout boys and girls.  Luckily it was not completely roughing it since we pitched our tents on the soccer field of a private high school.  There were bathrooms a short walk from our camping site (but strangely no sinks).  But it was definitely a new experience for me, and, possibly, good blog fodder.  And, no, that's not the only reason I agreed to do it!  Here are a few of my observations during my 28 hours in Scoutville.

1. French kids aren't perfect either.  Phew!  They may be less tantrumy in general, according to some, but I can tell you first-hand that some of the seven and eight-year olds I came in contact with had their moments of whining, pouting and not listening to instructions.  Great, it's not just mine!

2. French parents really do stress less!  I did observe less franticness when some of the accompanying brothers and sisters who were much younger wandered about and did their thing.  I would have been following my kid like a hawk in case she touched a stinging nettle, but I found the other moms and dads would glance over occaisonally and intervene if necessary.  But they didn't hover around their kids like I would at that age.

3. You cannot sleep outside when it's 33°F.  When I told people I was going camping and that it was supposed to be a cold weekend, they would laugh and tell me, scouts never cancel.  And they didn't.  And there was literally frost on our tents the next morning.  The other parents and I complained we could not get warm at all at night. This was despite wearing my coat to bed. That is certainly something I don't want to relive.  The kids at least had the body heat of the other kids to keep them slightly warmer.

4. The two-second tents take 15 minutes to refold.  I learned how to pitch the official scout tents.  Well, I watched and helped, but don't ask me to do it on my own.  My personal tent is the kind you open and that pops into place by itself.  Folding it back is another story, and as my husband was working that weekend, it took four men to put it back in place for me. 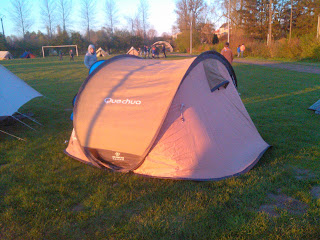 5. Kids have way more energy than adults.  The older scouts who organized the events had the younger ones participating in assemblies till nearly 10 pm.  After four hours of sports and relays, they did another hour of the French equivalent of dodge-ball.  I was ready for bed at nine, myself. 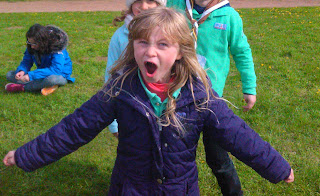 6. Teenagers are not all bad.  As this weekend included scouts of all ages, I saw how the older ones interacted.  It was refreshing to see teens organizing events and working together, enforcing the fair play spirit (and, by the way, French people use the term "fair play" straight from English) and helping younger kids.  It gave me hope for the future!

7.  A hot shower heals everything.  I was glad to be back home and become human again with a nice shower and clean clothes.  Oh, and a two-hour nap helps, too.

So I suppose if they ask me again in the future, I could help out on another camping adventure.  But only if I can bring a portable radiator, just in case it dips below freezing again.  Anyway, that's the scout motto, right?  Toujours prêt- always ready! 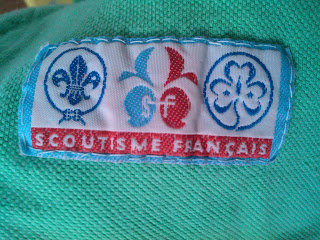 Email ThisBlogThis!Share to TwitterShare to FacebookShare to Pinterest
Labels: motherhood in France, stages

Being out of your element helps you to appreciate hot shower and comfy bed. Nothing better than seeing the stars.

Nothing like camping, whatever form it takes, to break you out of your basic comfort patterns. Sorry it was so cold, but it looks like Juliette and her scout friends had a great time. Just getting away from most of your shelter trappings helps you think. Your mind wanders among those lovely stars.