What kind of Disney princess are you?

If you have a little girl between the ages of 2 and 12, you probably know a thing or two about Disney princesses.  Though my six-year old is luckily not the kind to watch a DVD fifty times in a row, I've seen the latest Disney offerings enough times to get a good idea of each princess's personality.  And as a modern woman, I have to say, go, girls!

The past six or seven years have especially brought us some very refreshing and not bubble-headed heroines for young girls to look up to.  The latest films, starting from Tangled's Rapunzel up to Frozen's liberated sisters, have some great qualities to offer girls.  Here's my take on what your or your child's preference might say about you or her.


1. Blonde, but certainly not naïve.  That's our Rapunzel from Tangled.  When I first saw the trailer for this film, especially when her would-be love interest Flynn tries to woo her with his "smolder" and fails miserably, I knew we were entering a new era of Disney girls.  Don't let her incredibly long hair fool you, she's not into appearance and is up for adventure.  She certainly won't take crap from boys, and she's got a frying pan to prove it.  She is highly talented, not just for baking and arts, but charting stars and reading.  She's wily enough to make a deal with the theiving Flynn to take her to the castle and stands up to her "mother."  I wonder how many feminists saw the symbolism of Flynn cutting her hair at the end to free her from the witch's grasp and the fact that her hair turned a very non-princessy brown afterwards.

So if you like Rapunzel: you are, plucky, independent, and willing to strike off of the beaten path, even if you might have qualms in the beginning.  You are a romantic at heart, but you are able to put boys in their place!

2. A fiery and stubborn redhead.  Merida in Brave is quite a departure for Disney.  She's Scottish, with a thick accent, the first princess (to my knowledge) who doesn't have an American twang.  She never shows cleavage and she likes to practice with her bow and arrow more than sewing and more traditional lady-like activities.  She balks when her father, the king, wants her to marry someone from another tribe to form an alliance with their kingdom.  And when a competetion is set up to see which of her suitors is the best at getting his arrow in the bulls-eye, none come as close as she does with her own arrow.  So she proclaims that she has the right to her own hand!  How's that for post-modern feminism!  At the end of the film she is still unmarried and the kingdom is still at peace.

If Merida's your fave: you are probably a non-conformist, sporty and dreamy at the same time, and certainly not dependent on boys for your happiness.

3. The Frozen sisters, certainly not a heart of glass.  There are two girls to consider in this tale.  Anna is at first glance the more traditional princess, interested in finding her prince charming.  She has the meet cute with a visiting prince, Hans, but he turns out to be a real cad.  She ends up with the "fixer-upper" Kristoff, who is more genuine though definitely less polished.  Anna has all the hallmarks of the new Disney heroines, brave, bright and clear-eyed, but she let her heart fool her in the beginning.

Elsa, the older princess, has no love interest in the movie at all. She's an unwilling career girl, you might say, what with her ability to freeze everything with one touch.  She has to come to terms with her curse and in the end accept herself for what she is.  Girls across the planet have responded resoundingly to Elsa's call for liberation and breaking out of the mold imposed on her, as see in the song Let it Go.  Just type Let it Go on youtube to see a kazillion girls (mine included) doing their rendition.  With Elsa we see that the presence of a prince or even a love story is not necessary to her winning the hearts of little girls. 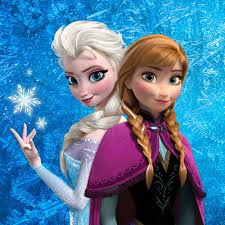 Anna fans: you embrace your girly side but have a heart of gold.  Family ties are the most important thing for you.

Elsa fans: you love the feel of the brisk wind on your face and the power you are learning to master.  You are stronger than you thought.   Boys will come later.

As for my own little girl, she also likes Belle from Beauty and the Beast, but certainly favors Elsa lately.  I'm partial to Rapunzel myself.  What about you?  I'm curious to see how this new generation of girls will take on adolescence with such brave role models.
Posted by Mil at 11:09 AM

Definitely a Merida, though I'm not too sporty, I do like to make things with my own hands. I don't need a guy to define me, and I don't want to wait hand and foot on one either!
But,I'd kill for that head of red hair! And a Scottish accent would be cool.

I am pleased with the evolution of the Disney princesses in our present day movies. They are not waiting for a Prince Charming to make them happy or complete. That's the message I am hearing. Some have tried to find fault with the latest batch of princesses, but they are certainly more independent and willing to break barriers than their predecessors. Plus, have you noticed the deep and thoughtful discussions they have with their other characters? They are not just trying on glass slippers, my dear!

Like the idea of Elsa best I think! Long live the evolution of Disney princesses!