Three and a half

It seems like just yesterday I was writing about Juliette hitting the eighteen month mark. And look at her now! As a parent, you just can't say it enough: time goes fast. Too fast.

Her three and a half year-old self can be very delightful. Last night we spent about half an hour asking each other back and forth if the other had eaten such and such non-food, like towels, paper, telephones. She loved answering, no, that's disgusting! Such small things can make a pre-schooler happy. I love it when I say good night to her and she keeps rattling on about things she's done that day. I look down and see her animated face talking about things semi-coherently and I still marvel that we now carry on fairly normal conversations.

School has made her more chatty in French, that's for sure. When she plays with her dinette set she'll speak in French like the cafeteria ladies, offering us more sauce or water. She also goes into French mode when she talks to her baby dolls, and this is no doubt because she's imitating the day care workers for her Wednesday day care. And at school she already has her little beau, whom we'll just call M. I swear she does that little shy eyes, turning coyly on her feet thing when she says goodbye to him at the end of the school day. But apparently little boy A is also her good friend and a boy in the class above her has declared she is his "amoureuse" or girlfriend. Things are complicated in pre-school.

She's starting to pronounce the "h" like a pro now. About a year ago she'd say, that's MameeLin's "'ouse" but now she can say "house". I think it's practicing saying "yo ho ho" from Jake and the Neverland Pirates. Thank goodness we can get some of the Disney cartoons in English with our Internet TV. Handy Manny, The Mickey Mouse Clubhouse and the pirate kids are part of her (and our) Saturday and Sunday morning routine.

Yes, she's a bit of a tv junkie, and I wish she weren't so addicted at times. She doesn't watch it all the time, and we try to do some non-TV things like painting (which she really loves) or coloring or blocks together everyday. But she'll often ask to watch her Strawberry Shortcake dvd in the evening. And I often say yes and get dinner started while she watches that and plays at the same time. 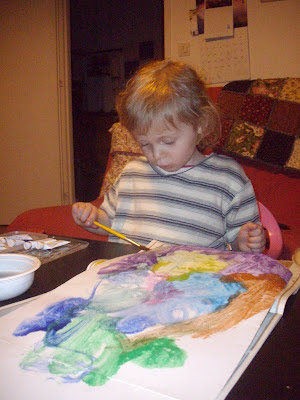 The budding artist.
It's amazing how much she's starting to understand and yet what still eludes her. We saw a homeless man teetering dangerously close to the canal the other day and the firemen were trying to get him to come with them. It's been sub-freezing for two weeks now, I should mention. I explained to Juliette that they were going to take him to a warm place and give him soup and a bed. She repeated that but made sure to add he wasn't coming to our house. Then later she said maybe the man was sad because he wanted his mommy. I wondered if there was some truth to what she said.

She loves her books that are from the Juliette series, about a pre-schooler with an uncanny resemblance to our little girl. Currently she's obsessed with the one where Juliette (the character) is a bad girl and has to go to the corner. Juliette (mine) can "read" the book pretty much by herself because she's memorized the actions. She also likes nursery rhymes and songs and as always, Elmo! 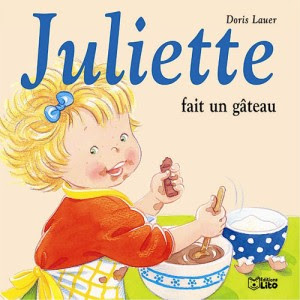 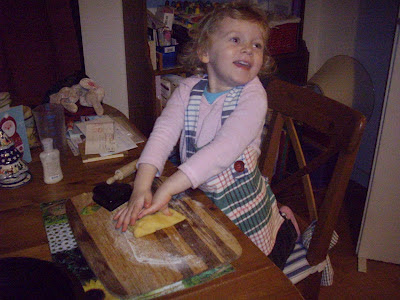 Tantrums do still happen and they can be doozies. How many times these past two weeks has she wanted to go the park on the way home and I've had to say no, 'cause it was freezing. She can go balistic on me at times like this. Or when I dare to mix her paint for her on the plate and she wanted to do it. Sharing is still not her thing.

And for the Juju fans, here she is chatting and singing a variety of tunes...p.s. I love how she says she's doing "stuff" at the beginning of the video.

So this school year of mine has made me less available for my Juju, but I'm still enjoying seeing how she grows from three to four years old. And trying to hang on to every sweet moment, of course!
Posted by Mil at 4:43 PM

You blink, and they are grown! Hold on fast and tight!
I am so proud of her balancing her French and English--she is brilliant!
And watch out, little boys--she'll melt your heart.

Juliette is so sweet, singing those tunes. Yes, mommy is always nice!

She's such a cutie!