Since we last spoke...

...I'd say there's not much news here. September is giving us one of those glorious blue sky days with the perfect warmth and sunshine. The type of day we were seriously lacking for most of August. Ironically it's the last day of summer and tomorrow's supposed to start getting rainy, as if on cue. I'm finding it harder to get up in the morning, as are my colleagues, and I'm convinced that the fact that the sun doesn't rise till 7:30 lately has something to do with it. Work's picking up, but still light enough to leave me some holes in my schedule. Each time I see a lovely afternoon I feel compelled to take Juliette out and take advantage of it. As if it could be our last lovely day for who knows how long. 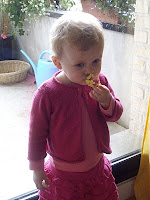 Meanwhile Juliette's been her cute and sometimes exasperating self. Here she's posing quite nicely with a yellow flower. I bet nobody can guess what it is!

She's still very keen on Elmo but is polite enough to say "Elmo, please," when she wants me to go to the Sesame Street Channel on the Internet. BEP fans will enjoy this clip of Will.i.am singing with the Sesame Street gang. And I know mom will love this one of Jason Bateman explaining what comfort is. I have to say I enjoy watching old and new SS clips. They are really quite clever and it tickles me to death when Juliette starts talking back to the screen and repeating things.

Last week marked my eighth year anniversary of my arrival in France. Each year it gets a little scarier to realize how long I've been here. Especially if I think about all my friends back home who in general are in slightly more comfortable situations while I'm in the low-salary and not always foreigner-friendly country of France. But let's be positive (oh, I'll try)! In these last eight years I've:

*learned to drive a stick shift and learned the French driving code (phew!)
*learned to speak better French than the few phrases I knew back in 2002
*learned that French people have a strange way of telling you you're wrong and that you probably shouldn't take it too seriously or you'll be wounded every two minutes (still working on that)

But enough about me. I came across and old British women's magazine from 2003 and even though it's only seven years old, you'll find that the celebrities have gone through some major changes, too:

Ben Affleck and JLO were still a couple. Now he's with Jennifer Garner and has two kids.

Tom Cruise was still with Penelope Cruz and Nicole Kidman was still single after their divorce.

Winona Ryder had shown up in court in 2002 for shoplifting. Has anyone heard from her since?

Madonna was still married to Guy Ritchie and living in London.

Renée Zellweger had recently broken up with George Clooney and was with the White Stripes guy. Now apparently it's Bradley Cooper. People were already talking about her weight ups and way downs.

Britney Spears had just split with Justin Timberlake. No kids yet.

So there you go. You can always count on celebrities and their crazy lives to make your own feel a bit more sane.
Posted by Mil at 3:48 PM

I can't believe that you've been in France 8 years. Yes, if we based our lives on celebrity gossip, a lot has happened in 8 years. I applaud you for learning to drive a stick and learn to drive in France. That is an achievement!

Cheers to the next 8 years. By the way, the number 8 is good luck in the Chinese culture.

Ah sweet picture! I would guess some form of Lantana, but I'm sure I'm wrong.

Be proud of all the brave things you've done!

happy Franciversary! I've been here 5 years now and not sure how Ive last this long! I still cant drive a stick shift (and refuse to learn) and I still don't understand the French....sending you hugs from Paris :)

Eight years, WOW! I celebrated my first year anniversary this past weekend. Love the celeb recap, my how life has changed...

Found you on Expatwomen so wanted to pop by and say hi! :-)