I tried to cross off things on my to do list. I sort of organized the bookshelf (the messiest parts are better). I sort of organized the closet (again, the most urgent areas). And sort of put photos in albums (just didn't finish). And I sort of made a charlotte aux fraises, the French style strawberry shortcake. This being the Lazy Girl's Blog, I took the easy route and found a self-proclaimed easy recipe on the Internet. Instead of messing with the gelatine leaves and such, I tried this recipe which calls for plain yogurt (actually fromage frais, but plain yogurt would do it, too). I was petrified I wouldn't be able to get the thing out of the pan afterwards, but as you'll see below, it worked out ok. However, the lady fingers were a bit soggy from the yogurt seeping into them, so any ideas on how to avoid that would be helpful.

Here's a journey in pictures with the instructions as well for those willing to try.

1. Dip lady fingers (if they're the hard kind at least) into a bowl of milk that you've sweetened to taste. Dip quickly then start placing in your casserole dish which you've lined with aluminum foil (my dish is about 4 inches tall/10cm, but you could go a bit higher). 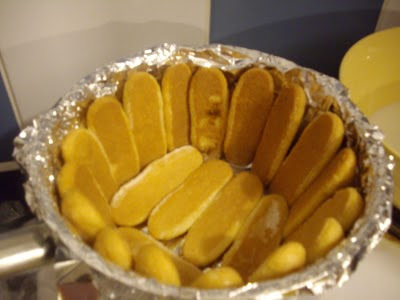 2. Now add sugar to taste to your fromage frais or plain yogurt. It calls for one kilogram which is a bit more than 35 ounces. You could also use vanilla which is already sweetened or why not strawberry, too. Put a layer of the yogurt in your casserole. Followed by a layer of sliced strawberries. Continue the layers. If your dish is big enough you can put a second layer of lady fingers in the middle. 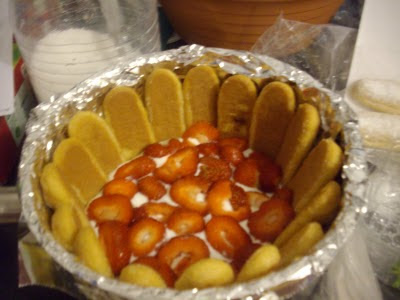 3. Finish with a layer of lady fingers. Cover with a plate or alumnium foil and refrigerate over night or at least all day. 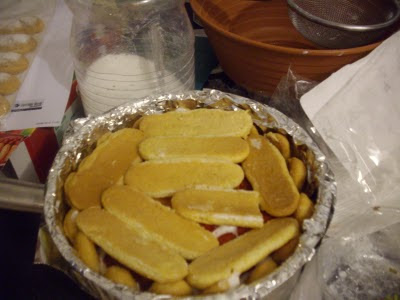 4. When ready to serve, put plate over the dish so that it will be on the flat side to receive the charlotte. Holding plate and dish together, turn it all over and set it down on the counter. Carefully remove casserole dish and then foil. And hopefully it will all stick together and look something like this. 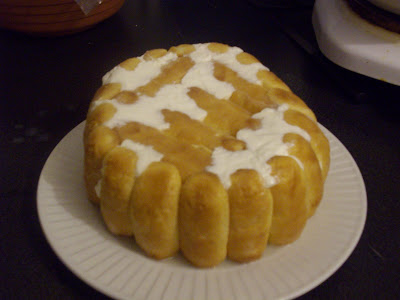 Garnish with strawberries or whipped cream. Hmm, I just had an idea. Instead of yogurt, why not try whipped cream for the layers. Less soggy perhaps? 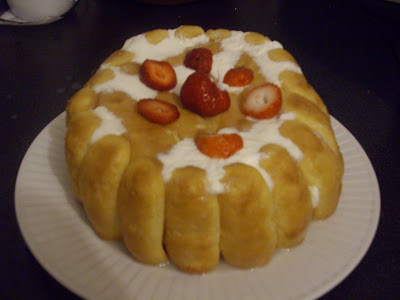 I want to try a real charlotte recipe soon. Or a tiramisu with rasberries. I'll keep you posted.
Posted by Mil at 4:50 PM

Email ThisBlogThis!Share to TwitterShare to FacebookShare to Pinterest
Labels: recipes

that looks delish and really easy to make! I might give it a try as soon as I'm all set up in my new place. How did it taste?

You are so adventurous!!!! I've never attempted a Charlotte! Congratulations! Now, send us all a piece right now---mmmmmmmm. Whipped cream would be great too.

That's impressive and looks pretty! I wonder if instead of soaking in milk, you can spray the lady fingers with milk?

I've made tiramisu, but with pound cake. It's thicker and doesn't soak up the liquid as much. Tastes really good.

I enjoy your photos of your food creations! Keep them coming.

It's BEEEEUUUUTIFUUUULLLL!!!!!
Love you,
Sunny