Why pencils have erasers 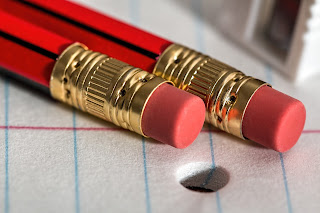 It doesn't matter because I still get that pit in my stomach (even if it disappears quite quickly) when I realize, damn, I goofed.

Take last Tuesday morning: I put the numbing lidocaine patches on baby's thighs as instructed by the doctor, one hour before the supposed appointment for the vaccines.  And I arrived at the free appointment room only to notice that the doctor comes every other week.  As in not this week.  So I put the patches on for nothing and got baby bundled up for nothing.

I could feel the hint of a tear come to my eyes at the mistake, or more at appearing silly in front of the nurses and employees there.  But they weren't judging me or chastising me at all.  It was just me being hard on me.  Fumblingly I stripped baby down to his onesie for the weighing and visit with the nurse.  That I could still do and ask a few questions about baby's health.

I chatted with another mom whose baby boy was six weeks old.  Alexandre was about that age when I first brought him here for his first weighing with this free service.  I listened to the lady who had come to talk about children's books and asked her about books for babies Alex's age.

While talking with her she noticed my accent and asked where I was from.  There I was thinking I didn't have much of an accent anymore, but I guess I always will!  And she asked me if I knew any English lullabies.  As she goes around different communities and does singing and other activities, she wanted me to sing her one.  And so a few minutes later I was singing Twinkle Twinkle, Little Start and she recorded it on her smart phone.

Then I saw the nurse and got Alex weighed.  He is over 12 pounds now (5.6 kg) and alert as always.  I asked her about cradle cap (don't worry, she said, no need to scrape it off) and when to start solids (six months is what they say now).  And then I dressed baby back to face the cold and said goodbye to the lady who had recorded my voice singing.  I told her I could participate in an activity if she wanted in the future.

So out of my "mistake" grew a chance meeting.  A few conversations and smiles.  Not bad for your ordinary Tuesday.
Posted by Mil at 10:53 AM

What a wonderful story of chance meetings and connections! Your little confusion on the date a doc visit was available needs to be let go and put in perspective. There's that guy in Hawaii who incorrectly alerted the state of an incoming interballistic missile and all that mayhem. There's the NASA scientist who failed to convert measurements to metric which resulted in a Mars exploratory endeavor to crash into pieces on the surface. Endless examples. We all do it. At least yours provided others with your kindness.