On belly buttons and second babies

My belly button will never be the same. 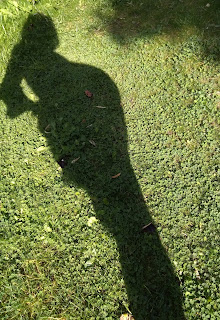 It was already officially an outie after my first pregnancy with Juliette.  A reluctant outie but definitely not an innie any more.

With baby number two, it poked out even sooner, perhaps at three or four months.  When Juliette caught a glimpse of it she would say things like, "ewww!" or "gross!"  I reminded her it was she who had poked it out in the first place.

At first I tried to hide it with two layers of maternity shirts or a sweater tied around my waist. But I gave up trying after a while.

At any rate, I know my body has changed.  I also know that's not the only major change that will take place.

Come delivery day, our family will never be the same.  We will be four instead of three.  There will be strollers and diaper bags to trolley around, for sure. But the dynamics will shift.  From the focus on one child to two, from reserving international flights back home for not three but four people!

I knew all this before.  I had thought it over before my husband and I agreed to try for a second.  Just like I knew that we would be in for sleepless nights, explosive diapers, dawn wakenings well into toddler-hood, terrible twos and all that.

It is the advantage of having been through it all before.  It also makes it less rose-colored glasses and more, get the sunglasses ready to hide the perpetual shadows under your eyes.

When I was still hemming and hawing about whether expanding our family was a good idea (and this phase took many years), I would do what all modern folks do and google it.  "Should I have a second child?" yielded some insightful articles.  Including one* by a man who said when you have a first child it is like being pushed out of a helicopter with no parachute and having to fend for yourself.  With a second you know you'll be pushed again, but somehow you are still game for it.

Another search I did to reassure my over 40 self was "celebrity moms over 40."  Yes, I will admit it. Somehow seeing that Julianne Moore and Gwen Stefani were biologically capable of giving birth at their ages made it seem less daunting of a challenge.  Even though I know full well they have staff to help if needed, if their bodies could produce healthy babies, it gave me hope I could, too.

In the end I knew no blog or article or bevy of Hollywood 40-somethings could really decide this for me.  It was what I (and my husband) wanted for our future family.  The words of friends echoed in my mind: the friendly "tick tock" of Caroline imitating my biological clock when I expressed doubt. Or sayings like, you regret more what you don't do than you what you do.  It may have well been a Facebook meme to that effect.  I felt I would regret not trying at least.  If it didn't work, it didn't work. But I would know I had tried.

Nobody knows the future.  I know that a newborn can bring stress and anxiety but also joy and fulfillment.  I cannot know how the family will evolve but I am sure there will be moments of sweetness between big sister and baby brother, fun games on papa's lap, more silly bath songs from me.  There will also be tensions and tantrums and hair-pulling moments.  But that goes with family life and growing pains.

Only one thing is certain.  I will definitely be sporting an outie for next swimsuit season.

* I unfortunately cannot find the link to this man's article but if I do I will update the post.
Posted by Mil at 11:35 AM

Life changes are inevitable! With yours comes boundless love. The outie is worth it!

Lovely, my friend. Never have looked back since adding our boy to the quartet. ��

Ha! A swimskirt might hide that outie! I wonder if this is a sign that this little guy is going to be a force to be reckoned with, (Like Big Sister).