If I haven't blogged in a while it's because I've been awfully busy.  Which is exactly what I wanted to talk to you all about today.  The majority of you out there work yourselves, and even if you don't work now, no doubt you know that rush of work days that melt into evenings of dinner prep and bath time for kids and falling into bed exhausted.  Only to wake up and do it all again the next day.  There is never enough to time for everything.  Until you retire.  And then you've got too much time.

This very thing struck me the other day as I was driving home and saw the neighbhorhood retired guys who sit on the low brick wall and chew the cud.  Or whatever the French equivalent to that expression would be. I think their wives must kick them out.  I was rushing home from a long day to get Juliette from school.  They were shooting the breeze and watching cars of younger working folks go by.  I don't have enough time.  They have too much.  Push and pull, yin and yang, feast or famine.

Then there is my neighbor, a 74-year old widow and retiree who is lonely and bored.  So much so that she sometimes knocks on our door three times a day to bring us some taboulé she prepared or ask Remi to cut a big celery root for her.  She certainly helps us out a lot by picking up Juliette from time to time when I finish late.  We appreciate her help immensely though sometimes the notion of privacy seems to go beyond her.  She needs to kill her time, while we value any free time we have. 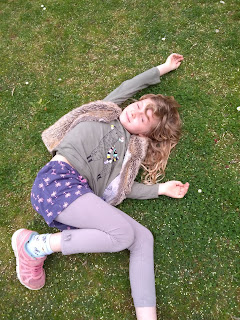 No where do I see the push and pull of time more than with Juliette.  My little big girl is just that lately.  Still sliding tweendom with sarcasm and sweetness.  I see her growing longer and thicker.  I see that little girlness sometimes taking a backseat to funky dances in front of the mirror and acting like she is a singer.  I blame Katy Perry but I know it is kids these days.  If I had a dime for every time I reminded her she is 8 and a half, I would be independently wealthy for sure.


Sometimes I push her myself.  I wish she already could do some things all by herself, like wash her hair and add the conditioner.  Or I wish she understood and reasoned like an adult.  At the same time I secretly don't want her to grow up and value giving watching over her bath time.  I will never get used to the push and pull from this girl, but it certainly isn't over yet.

Even Catki has been pushing and pulling me this week.  Sometimes he is a first class nuisance, getting in my legs every time I go in the kitchen as he reminds me he is hungry.  Banging on the downstairs doors at six to remind us he is...surprise- hungry.  Then this week he didn't bang and didn't meow.  He basically didn't eat for five days which is just not like him.  It took two trips to the vet, two shots of antibiotic and one laced with cortisone to see improvement.  Two days later we heard those sweet meows in the morning.  He was better, though not quite his normal self.  And maybe out of habit he meowed because it was morning.  Sometimes he pushes me to the edge, sometimes he pulls on those proverbial heartstrings.

So whether you are in the push or the pull, remember there is something to value and appreciate in each state of mind.  Don't let the rush prevent you from slowing down a bit and enjoying moments, people, pets before it's too late (or they grow up or pass away).  It's a balancing act worth perfecting if you can.
Posted by Mil at 9:10 AM

Very thoughtful. You must have found a moment in your hectic life to reflect on what you are doing, and that is the key--stop, look, listen, get off the cell phone or the internet, and take stock of the moments. If you can find some small space of time each day to do that, then all the daily hustling won't swallow you whole.
...and good luck!