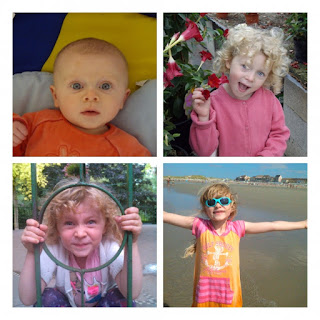 "It can come around 8 or 8 and a half years old," the pediatrician told me after he had examined Juliette.  It took me a split-second to realize what he meant.  "It" was the p-word.  Puberty.  I wanted to shoot him a dirty look.  Not that.  Not yet.

Juliette was on the papered exam table, legs stretched out straight in front of her.  The curls that fall down her back are still blond even if the roots are getting darker.  I noticed a few particularly long toe nails on her bare feet and felt a bit ashamed.  She still doesn't like cutting her toe nails but will do it by herself when prompted.  There she was sitting in her aqua colored girls' briefs, straight up and down figure like nearly all the girls her age.  So why was the doctor bringing this up already?

In fact he didn't mean specifically for her, but he meant that today it is possible to have early cases.  Or at least one sign, such as some body hair, that comes a year or two before the real change.  (If snark is a sign, then we are in trouble.)

And though I chatted with him about the phenomenon (due to environmental factors, it seems) what I really wanted to do was put my hands over my ears and sing, la la la until he changed the subject.

I had seen a few documentaries or TV news reports on it.  The images of a six-year old who had the beginning of cleavage haunted me for weeks after.  Or an eight-year old who had to have painful injections to suppress a very early case of development.  Is it from plastics that we heat?  For a while now I have tried to be extra careful not to heat things in plastic in the microwave, though occasionally I do it.  When she was a baby the bottles were BPA-free.  Was it pesticides in our water, in our food?  I don't always buy organic food or spring water, and we are often in Remi's greenhouse which certainly has residues of chemicals no matter how careful we are.  As if there weren't enough reasons for parents to stress and feel guilty, here was another one looming down on us.

Maybe it is my own memories of growing up and the mixed emotions of adolescence that are giving me pause.  I know how tough it can be for girls especially, and I dread her having to go through those sometimes painful physical and emotional changes.

That night I paid close attention to her way of talking and playing.  She still likes Playmobil, good!  She is obsessed with Chica Vampiro which features a Columbian teen turned vampire...like most girls between 6 and 11 in France.  She often sighs and snarks...bad.  She still giggles like mad when I make her Ken doll do something silly- good.

Let's face it, she is a little girl but she won't stay little forever.  Maybe the big bad years of hormones and more intense eye-rolling are postponed for now, but I can't run and hide.  All I can do is hope and pray that lines of communication will stay open and that she will turn into a bright, kind, healthy adult.

In the meantime, I can thank the well-meaning doctor for reminding of one thing:  to hold on to those "little girl" moments we share now and cherish her for who she is today.  And hopefully I have a few good years to get used to the idea that she'll soon be obsessing over real boys instead of ones on tv.
Posted by Mil at 8:22 AM

Email ThisBlogThis!Share to TwitterShare to FacebookShare to Pinterest
Labels: motherhood in France, stages

I told you that at some point you would "miss" the little versions of your child and wonder where they have gone....you can't freeze them in time. You can only hope that your children will survive your parenting skills and grow into beautiful souls that want your company from time to time. Like mine did!
Fortunately, Juliette is still "little" and lives to play and loves to giggle and tell riddles. Treasure it now.