For each age, there is a stage.  I've already chronicled some of the more well-known ones, most recently six and a half.  But my little one keep's getting taller and smarter and sassier.  There are also still some very sweet moments so it's frankly hard to qualify my 7-year old.  But since I like lists, I'll try anyhow.

Seven is sassy
I just came back from dropping Juliette off at her scouting walk in the woods.  Shy at first around the other parents, after five minutes she was chastizing me for not getting the right photo album to put all their scout poems in. And not to mention scooting away from me when I tried to get her to wear her raincoat.  And frankly there are some times at home when I think she is 7 going on 13 judging by her tone of voice or eye-rolling.  Oh no, the seven-year old is no stranger to sarcasm;

Seven is silly
But she still has that school girl sense of humor.  Poop and gas still make her giggle.  Or just telling silly stories or making her Playmobil characters attack each other and be "bad."  She will still make funny faces in some photographs and make up funny songs (in English, too, to my great pleasure). 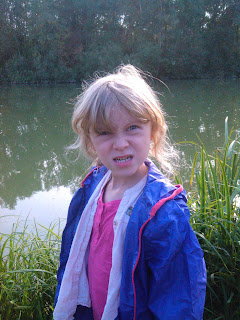 Seven is serious
The age of reason is upon us.  She questions whether God exists and has her opinions about a lot of things. She listens to what happens in the news and though she doesn't always get it at the time she will later make connections about things and ask me questions.  Just today she integrated Syrian lions in her Playmobil game since we have been talking about the migrant situation lately. 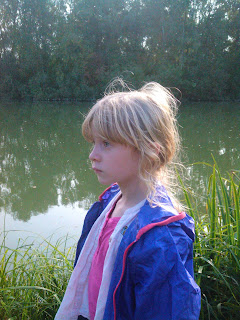 Seven is sweet
She likes to play with my hair or take my face in her hands.  She loves bedtime stories and requests cuddles.  So even though she sometimes stares at me fiercely with those cool blue eyes, I know her sweet side will come back soon. 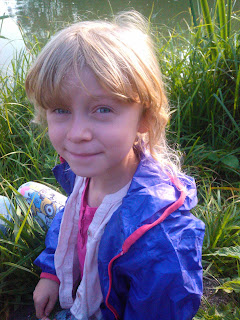 Seven is still small
I can still pick her up and Remi can still put her on his shoulders for a piggy-back ride.  Of course she's getting heavier and these rides are shorter than before but she is still a "little" girl.  I sometimes look at her hands or feet compared to mine and marvel at their "still" smallness. 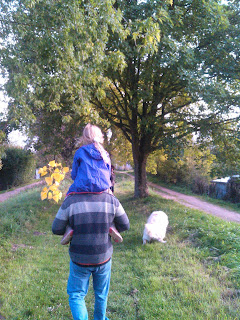 Seven is starting...
...starting to see the world differently.  She is now enamored of slightly bigger girl shows like Chica Vampiro and she cares about how her hair will be done for school.  She is starting to read and write so much better and have real "lessons" at school about line segments and living versus non-living things. 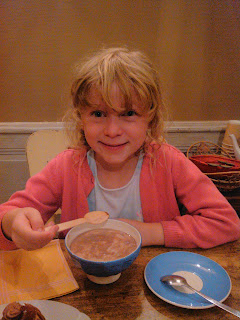 Seven is seven
She can't escape her age, and neither can I.  She says "ewww" when people kiss on tv and she still dawdles at bedtime because she wants to watch another news report on tv.  She still asks me to stay a while with her in her bed before she goes to sleep and yells "mom" insistently because she desperately needs some construction paper.  Seven is a lot of things and I try to appreciate them all without letting her turn into a spoiled brat. 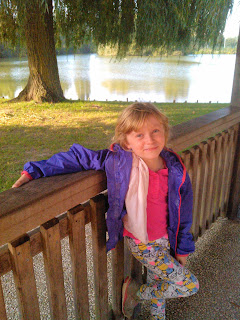 The other day at the playground that she's been going to since she was a toddler there were some middle-schoolers showing off on the swings, acting out, acting their age.  I said in English to Juliette that I didn't like it when the big kids hung around the playground.  "Does that mean you won't like me when I'm big?" she asked.  "Of course, I'll love you," I said.  "I just hope you won't get on the swings when there are little kids around."

Email ThisBlogThis!Share to TwitterShare to FacebookShare to Pinterest
Labels: stages

It's so heartfelt when you write about your daughter. Amazing that you're capturing her growth and blossoming. What a valentine for your little one (who is changing every day, yet still sweet and smart inside).

I've often asked, "Where is my two year old Milam or my four year old Jessy?" The children you were at those ages seem like unique entities---other daughters I have misplaced, or who faded away, and I miss them--I miss those little kid conversations and their sense of wonder at figuring out something so ordinary to us older people, but fascinating to them. Their voices are different too, along with the shape and size of their little bodies. We can't capture an age and keep them there, unfortunately--all of those personality traits you've described here become entwined into the adult you. And I think we revisit that younger self through our children, and grandchildren!
Juliette is definitely all of those Sides of Seven, and she can zoom through them in the course of an hour! Sweet, silly, sensitive, sassy, and lovable seven! And I will love her when she is a big kid too---but not so fast!