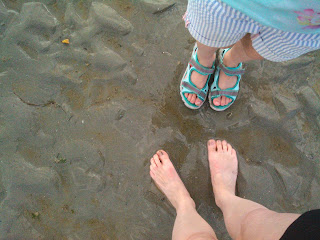 The other weekend we went to the beach.  We dug our toes in the sand, walked on the temporary sandbars at sunset and ate crepes topped with sugar.  It was lovely.  I didn't think so much about the masses of people in Hungary in refugee camps or their plight.  Every now and then my mind would stray to the topic, but it seemed so distant, both in miles and mentally-speaking.

We came back Sunday evening, rested and sun-kissed and started our weeks back at work and school.  Still the news spoke of all the migrants.  They were protesting in the station in Budapest, trying to get out of that country to continue on their journey to Germany or Austria or beyond.  Juliette asked why they were upset.  Because their countries are at war or they are very poor and they want to live here, I explained.

Wednesday, in my little world, we realized we couldn't find Juliette's raincoat.  I looked around almost frantically for it, thinking we must have lost it on the way home from school the day before.  I was sad to think it was somewhere outside, maybe being worn by another child.  But I figured maybe that child needed it more. And I realized in the back of my mind, that grieving over a raincoat was a little silly.

Then as I sat scrolling Facebook on the couch that evening I saw that picture.  The one that moved so many, dare I say moved the world.  The one of a toddler washed up on the shore, drowned when his boat didn't make it across the sea.  And like so many others I looked at that picture and imagined my own child being put in such a perilous situation as crossing the sea, fleeing a war-torn country.  And like others, I signed an online petition and said a prayer for that family who had lost two children and the mother in this tragedy.  This was a real reason to grieve.

But still my daily life continued.  One of getting up and forcing my eyes to open at 6:30 or some other ungodly (in my opinion) hour.  Of making my little Senseo coffee with milk and sugar and checking my emails.  Of hugging my daughter, doing her braids and seeing her off to school.  And not worrying about bombs falling on us.  And like so many others, I felt guilty at how plentiful my life is compared to some.

And then I saw how some German people were waiting at the station for the refugees who arrived there, a child giving the refugee children his old toys.  And I heard that some British families were saying they would accept refugees in their homes.  And I thought, why aren't we hearing this in France?  Is my adopted country not compassionate?  But would I open up my apartment to a refugee?  Too many questions that go unanswered. That we don't know how to answer.

Now France is talking about which cities might welcome refugees.  I still don't know that I could do anything.  Offer my services as an interpreter at the town hall if needed?  Donate clothes, toys, money?  Pray for a happy end for all these unhappy situations? Sometimes I am too timid/lazy/self-absorbed to take the first steps.

I am not a highly religious person, but I do remember a story from my Catholic schooling that has stuck with me through the years.  One of Jesus saying, if you deny the person who is hungry or begging, you are denying me (Biblical scholars, feel free to correct me ;).

There was no talk of borders or nationalities in this story.  Humanity shouldn't stop at national lines.  But are we brave enough to imagine a life without borders?  Some people on this planet are doing just that, opening hearts and homes to strangers.  Will we find it in our hearts to do the same?

Even a small act of kindness can create a large ripple of good.
People are torn over this outrageous assault on mankind. How dare this happen again in our world! Have we humans not learned a darn thing from the past?

I totally understand the feeling of protectiveness of one's territory and not wanting to lose a sense of stability (a mirage at best in today's world), but if we imagine that this was our family walking hundreds of miles, sleeping outside or in tents, eating whatever handout can be found, we would desperately want the kindness of good people to help us overcome this horror. They are so vulnerable, and the children are truly innocent.

I also fully understand wanting these refugees and economic migrants to be vetted. There is danger today like we have never seen before. There are threats that evil may be disguised as desperate migrants. There are ways to do that quickly and respectfully. We have to be cautious now, but we also have to be humanitarians.

So, we should reflect and see how much we have to be grateful for, what we should not complain about, what we should value, and what we can do without so that someone else can have a chance.