Nobody tells you that after the Terrible Twos and Troublesome Threes, that four is Far From Finished. Or maybe they did but I wasn't listening because I was too distracted by the challenges of young toddlerhood to worry about what was around the corner. Naively, I thought that once potty-training was finished and pre-school started that things would magically fall into place.

But as my high-school friend and fellow mom, Lauren, says, once you figure out the stage they're in, they change. How true.

Whereas four-year olds are definitely more verbal and can at least tell you what's wrong, more often than not, they don't want to tell you. At least mine doesn't. She'd rather whine and cry and roll up into a ball in her room than come out and say she's sorry for swatting one of us or going postal on us for asking her to eat dinner. I can say "use your words" till I'm blue in the face, but until she decides she wants to get out of her tantrum mode, not much will happen. Or I must trick her into easing back into a good mood by pretending nothing has happened or getting her to help me with a small chore.

All of this would be tough enough without the "outside world" giving me stares and/or unsolicited advice. I'm still a bit at odds with the in-laws and sometimes my husband as to how one should react when a child is screaming because they don't want anymore food. It's been tough lately. Once again (!) I've been reminded of my cultural differences in terms of child-rearing. Luckily I recently met a Canadian expat with two small kids and she's been a great comfort reminding me that I'm not some kind of slimy green alien with radical ideas.

The thing is, four is difficult. They are schizophrenic. They are becoming model citizens with their pleases and thank yous, but they are also primal beings wanting their way. All the time. A year or two shy of the age of reason but past the babbling baby stage when you could just blame their bad behavior on being babies. 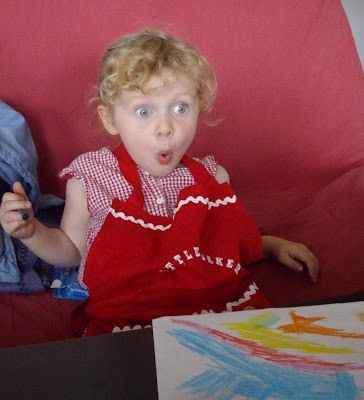 And then there are those golden moments when she plays contentedly and tells me hilarious stories. She says funny things all the time and I really should write them down more. She tells me I'm her "snuggle puppy", from a book we like to read. And sings songs about "fascinating" cause it was the word on the day on Sesame Street. And tells me she's shy at school because her "volume isn't working." I can tell she's got a mind that's taking it all in and sometimes she is the sweetest thing. But sometimes she's a devil child.

So, I'll just have to hold tight and enjoy the good moments, like her holding my hand tightly as we walk (when she's willing to hold my hand, and when she's willing to walk...), her snuggles and her silly laughs. I love her despite the tantrums and I know she'll grow out of them (just like I did, right, mom and dad?).

So we'll end on a positive note, with her dancing away to that catchy Shakira song.

It's time for a freakout??? She still has that dancing soul inside of her.

Hang in there and enjoy 4, the good and the hard times. She will keep developing as you witness her growing up and becoming an awesome person. Do you see yourself in her? Or see Remi in her?

E is now 17 and I can see how she's a combination of Joyce, Thomas, and I. And of course, Elizabeth has her own soul too.

Your's and Remi's contribution is great, your love for her is unconditional. Go awesome parents!

Yep, you described the 4's perfectly. I've got one of those as well as a 2.5yr old, you can guarantee one of them will be tantrumming!

She dances better than I do :) Her bouncy, curly blonde hair is so cute!

No parenting advice for you for obvious reasons, but if it's any consolation, I was a horrible child up until around age 6. Then I morphed into a polite, shy girl. Juju looks vibrant and happy, and testing parental limits is all about growing up. Hang in there :)