The day when everyone's a rocker

Today’s my hundredth post. This blog has been running for over a year now and it’s become an indispensable part of my life. I don’t mean to be overdramatic, but it has helped me rediscover my need to jot down my thoughts and observations. It’s reminded me that I enjoy writing. For years I kept paper journals but it fell by the wayside before this blog. Now I can annoy the world with my little head dramas! Baby’s probably thinking that all humans spend a good part of their lives on the computer. This Mother’s Day card mom sent me is right on the money. I just have to remember the baby is more important than the blog! Of course. But even moms need a little release sometimes. 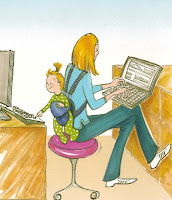 And what better way to celebrate this event than with a little musique! Today’s the “Fête de la musique or the national music festival in France. It’s one thing this country does pretty well, if you ask me. They purposely put it on the summer equinox, so you’ve also got the added daylight, till about 10:30 here in France. In my city there’s a great ambience with little groups playing on street corners and in front of cafés. Last year my eight-month pregnant self went out with two girlfriends from work since Remi was at a wedding. And I enjoyed it so much I was eager to do it this year, with baby now ex-utero.

The two coworkers weren’t available this year, so I dragged Remi and his friend Julien out to it. The cool band of middle-aged guys was there again playing Midnight Oil and Sweet Home Alabama. Don’t ask about the accent. Most of the lyrics were pretty indistinguishable, but they get an “A” for effort. Even if I am an Alabama girl, I somehow get a little shy when this song comes on, no matter where I am. It’s like I’m supposed to do something, but I’m not sure what.

After a few songs we moved on to another café, outside of which another gray-haired part-time rocker was crooning old French classics. And in front of the oriental restaurant a group of 20-somethings were doing a damn good job on British glam rock. I started head-bopping the minute I heard the guitar riff from Blur’s Song 2. Remi and Julien gave me perplexed side glances. They’re not used to this mild-mannered girl grooving to screechy guitars and drums. Hello!? it’s Blur, dontchaknow?, I tell them afterwards, and they sort of kind of remember it. Then a respectable rendition of Muse’s Time is Running Out, to which I gave Juliette her bottle. Was that a little fist waggling I saw on her part? I must start her musical education now.

The boys left us to go play pool, and baby and I stayed with the glam-rockers for Nirvana’s Smells Like Teen Spirit. Then we dropped back by the first band, in the middle of their Eric Clapton ode, I Shot the Sherriff and Cocaine. I guess I’m showing my age to be digging this type of music. We went to the Place du Théâtre where a group of 14-year-olds was giving it their all on the hook from Smoke on the Water. These kids rocked. Never mind that none of them can drink or drive and that sometimes the drums go all out of order in the middle of a song. I should have brought my camera and taken pictures, ‘cause they’re gonna be big one day. The drummer had the rocker bangs already and the lead singer had put gel in his hair for the spiky effect. And he sang in very impressive English to The Most Loneliest Day of My Life.

But baby’s bedtime was approaching so at a quarter to eight we headed home in the summer sun. Next year she’ll be out of her stroller and dancing on the sidewalks with me.
Posted by Mil at 10:41 PM

Email ThisBlogThis!Share to TwitterShare to FacebookShare to Pinterest
Labels: music

Wish I could have come too. It sounds awesome!!! I would have known what to do for "Sweet Home Alabama," gal--you sing along--loudly! And the Clapton covers would have probably embarrassed you with my rockin' along.
Sounds like a wonderful day, and I'm glad you had some fun. Life has joy. You must watch for it and catch it as it rushes by.
Keep writing--you're an artist with words. Luvya-Mum

yay for the 100th post!! Glad you've kept this blog up because it helps keep me connected to you (before in H-B and now that I live so far away!)

I love the Mother's Day card your mom sent you...I'm sure for a lot of moms, it's pretty accurate! Even though I don't have a baby, I'm sure Max gets sick of staring at the back of my head all the time when I'm typing away at the computer and he's on the couch behind me.

See you in July!!

Of course you should rock out to Blur and Muse and Nirvana. Those French boys don't know what their missing. Don't worry, you and I will make sure Juliette has the appropriate musical education. Wish I could have been there with you! Love you!

Happy 100th post! Please keep writing because I love reading about your life and thoughts. And the videos are pretty gosh darn cute too.

Dear Milam,
You are an awesome writer and don't lose sight of it. I read your Kittles stories every year to my students to get them going when I want them to write something that makes sense and is a story. The paper is a little yellowish and worn, which adds to the mystique and drama but they are always amazed when I tell them my niece wrote these stories when she was about their age. They want to know all about you. Maybe one day I can introduce you as the famous novelist who started with The Kittles!!!!
Can't wait to see you. Love,
Sunny

hello!
so, your bilan woman talks a lot? Mine is pretty good actually but it's getting to crunch time and I don't know what to think about the results so far.

send me an email about whata you've covered so far and we can discuss it better there. emmygration(at)gmail(dot)com